Selling Canada’s game should be as easy as Wayne Gretzky setting a new National Hockey League record.  But as Okanagan Hockey Group (OHG) has demonstrated it is anything but.  “What we are always trying to be the leaders in youth development, as well as leaders in youth hockey development whether that’s through education, character development, or through hockey development; in all of the different avenues we’re trying to make young athletes better at what they’re doing in their trade,” explains Andy Oakes, President and Director.

OHG was founded in Penticton in 1963.  Over 50 plus years, it has become a leader in the hockey camp industry and has grown into the longest operating hockey camp in the world.  Along with Penticton and Edmonton, it has operations in England and Austria.  Each operation has three different distinct business units consisting of a Hockey Academy division, Hockey Camp division and a Combine division.  Academies focus on promoting the long-term development of athletes in the classroom, on the ice and in the community.  Targeted in the Camps division are three specific streams of hockey training: development, advanced development and specialty programs.  Combines are designed to assist high-level minor hockey players with their skill development and provide exposure to the Western Hockey League by participating in comprehensive on-ice and off-ice testing with state of the art equipment.

So, just how does OHG accomplish such an ambitious list of offerings?  Oakes says the secret recipe consists of having the right people in the organization, key locations and facilities.  “We’re a face-to-face, one-on-one client type of business so the type of people we have in the organization really gives us an opportunity to have success or failure. If you were to begin, you can bring it back to the roots and back to Penticton… location, location, location is important to our current operation.  It’s our biggest Academy and Camps division and having our head office here, Penticton has been fundamentally important for the longevity of the business. Wherever we go we have to have state-of-the-art first-class facilities. We’ve got state of the art facilities at our Edmonton Academy based out of the Royal Glenora Club.    In Austria, we’ve got state-of-the-art facilities that are owned and operated by the federal and provincial governments that they’ve given to us. ”

Young athletes from 12 to 18 years of age can participate in OHG’s Academy programs.  “The entrance requirement basically is looking at an athlete through three different lenses.  We look at their hockey and athletic ability.  We look at their academic ability and then their character and family structure. Once the athlete has passed those three areas of evaluation then we’ll look at acceptance.”

The Academy programs are an investment

The Academy programs are an investment “Within the Edmonton and Penticton models, tuition is $26,000 Canadian to come into Penticton. On top of that, we will have a billeting fee that some families will pay, if required of approximately $7000 for the 10 month school period which goes directly to the billets. If we have an out of province or international student they’ll also have an international student fee that goes to the school district which is about $10,000 and then each team has a very specific team fee based on their operations.  It can range from $2000 up to $5000.” 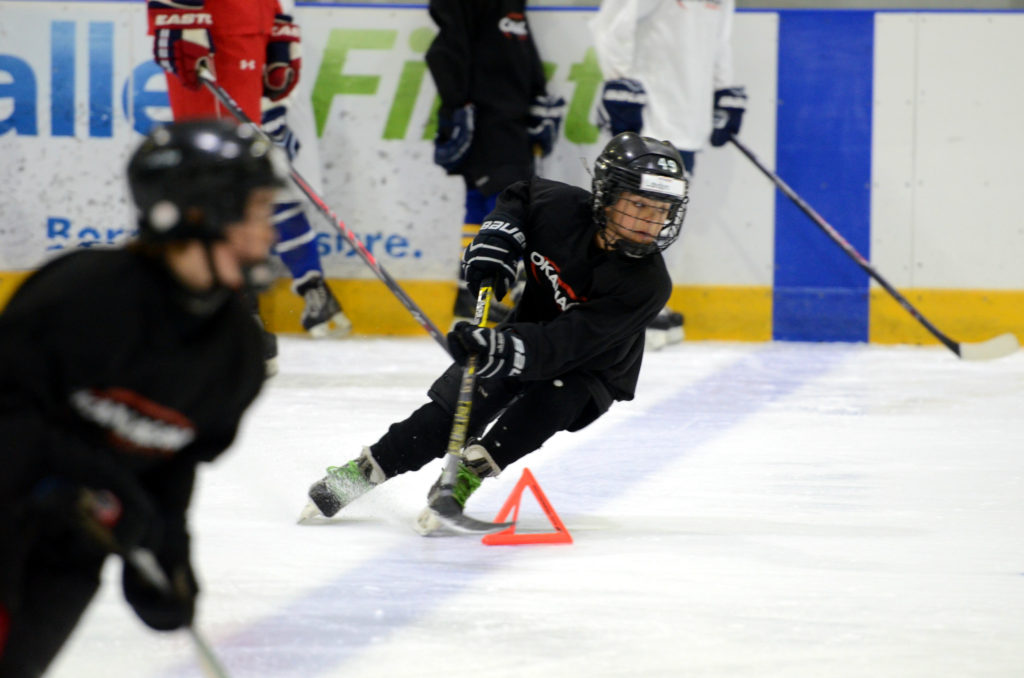 For the money they’re investing in their children, parents are looking for more than physical and character development.  They also want academic experience.  “That is something minor hockey cannot give. So, when you look at a young male or female growing up at 13, 14 or 15 some families are wanting their athletics tied directly to their academics.  Whether that’s horseback riding, soccer, basketball, volleyball or hockey that’s what the family choice is.  The biggest trend for people coming to sport schools, I think, is because of the education” explains Oakes.

In order to do his job effectively and efficiently, Oakes relies on a broad support network.  Firstly, a knowledgeable and experienced Board of Directors, consisting of JP Kaumeyer, Doug Corbishley, Al Coates, David Willis, George Melville and Dixon Ward.  “I meet with that group on a quarterly basis.  They’re also involved in any new business thoughts, those sorts of things. It’s very much a positive professional working board. The Board of Directors are not involved in the day to day operations. They very much take a 30,000 foot level approach to governance and financing. We also have an Executive Committee which meets monthly consisting of our senior management team, myself, JP Kaumeyer and Doug Corbishley.  The executive committee delves a little bit more into the operations. It’s been a very healthy thing for our business.  It’s really helped our business because we’ve put a lot of senior experience within that group of people. They have been able to take their experience and lend it to a fairly young and inexperienced management team. That has allowed us to really personally grow as a management team quicker than we would have been able to without their guidance.”

Two people in particular that Oakes calls on for advice

Two people in particular that Oakes calls on for advice are Bob Nicholson formerly the CEO of Hockey Canada  and Al Coates, both having extensive NHL experience as well as with managing people.

Having OHG headquartered in Penticton has created challenges for the organization but have been beneficial to the city.  “One of the things we struggle with here is a labour pool.  The majority of the people we hire, on a full time basis, we have to move into the community, just because we’re so specialized.  There are some challenges there but it also works as a benefit because people don’t move here unless they want to live here.  Attracting good people through the city and through the amenities the city has to offer is very, very positive.  There’s opportunities for growth in Penticton.”

Trying to juggle sports with education and sharing sports facilities with the community also has its challenges.  “We are limited by time schedules.  Our athletes go to school from 8:30 to 1:00 and then they come here to train from 1:00 to 5:30.  We try to get off the ice so we’re not interfacing with minor hockey, figure skating or other user groups.  We are limited by that window and we can’t flip-flop education and hockey because of the school scheduling.  So, there’s a little bit of a restriction around growth there” says Oakes.

Okanagan Hockey Academy in Penticton, will be adding an eighth team to its fold bringing its enrolment to 160 athletes for the 2016-2017 season.  That in turn will increase the need for additional housing needs. “In our summer period, the Hockey Camp division’s biggest obstacle goes back to facilities and not-so-much the educational aspect.  Affordable, acceptable accommodation for families becomes an issue in summer.  Over time, Okanagan Hockey School in 1963 and Okanagan Hockey Camp 2016, are basically the same.  Families coming with trailers, campers, or families driving in and wanting accommodations just to spend the week in Penticton.  Unfortunately, camping and things like that have been limited.”

With more growth on a global scale, human resources play a greater role once again.

“The 2016–17 season will find OHG’s combined Academies division with 15 teams globally (320 athletes), in all locations.  When you look at our Camps division we’ll work with 5000 athletes globally aged 5-18 years, and in our Combine division we’ll work with approximately 3000 athletes,  and everyone is a minor.   The people we put in place to work with these kids and the people that we’ve managed to put in place with them, is our biggest risk. If you have the wrong person get involved in the organization or something bad happens to an athlete whether it be transportation-wise,  be it bullying, or harassment, those sorts of things, those are our biggest risks.”

OHG employs a detailed checklist when it decides to expand its operations.  “When looking at a new location, our model is to see if we can take our existing business unit into the market. When we look at that market, we look at minor hockey registrations.  We research the player base within the immediate area and then we research the player base within a fairly good geographical region. Then, we will research education facilities to have an understanding of the public system, private system or Catholic system. We’ll look at facilities after that to determine whether there are facilities that are under-utilized or are there facilities that need to be propped up.  One of the advantages that we have to look at are private/public partnerships.  If we go into a facility, can we benefit the person, the corporation or the community that owns that facility? Can we buy eight hours of daytime ice that they can’t sell anywhere else?  And then we’ll do the normal demographic studies.  What we do is look from an academy perspective, where we are in relation to the competition.  Do we have somebody to play within a distinct area?”

OHG will go through a five-year plan workshop next month and Penticton is very much in the picture.  “You’ll see growth hopefully here in Penticton. You’ll also see growth in some of our other locations. We look at a few of our business units right now as being very mature.  Penticton’s Academy is a very mature unit.  Edmonton’s Academy is a very young, immature business unit.  It’s going to take the next two to five years before it turns into a mature business unit.   Austria is very mature because it’s 9 years old now.   So we have this blend of mature and immature groups and we need to move them along but we also need to be looking for the next thing.   Combines for example, that is one of the areas that we’re looking at as a business saying what else is there, what else can we build out of it. We really feel it can be a leader in the industry.”

If Oakes only had his two daughters to sell on OHG’s Camps, Academies and Combines, his job would be a tap-in goal.  “Both girls are in hockey right now.  I didn’t prod them. I didn’t encourage them. When they were 3, 4 and 5 years old, they did learn to skate and all that sort of stuff.  We would go public skating. Two years ago my 10-year-old came to me and asked if she could try hockey so she came to camp and tried it and has played ever since.  Then, a year ago my youngest daughter asked to play too.  So, now I am a hockey parent.”

It would appear, Oakes’ daughters and all kids who enter OHG’s hockey programs are in safe hands.  The future of hockey is looking very bright, thanks to OHG.

Next article Organizational Culture – A Powerful Force to be Reckoned With »